Looking for a simple DIY way to organize your spices? I recently did a complete spice organization makeover that we absolutely love. I found the best containers, labels, and accessible storage solution to end our spice organization nightmare. 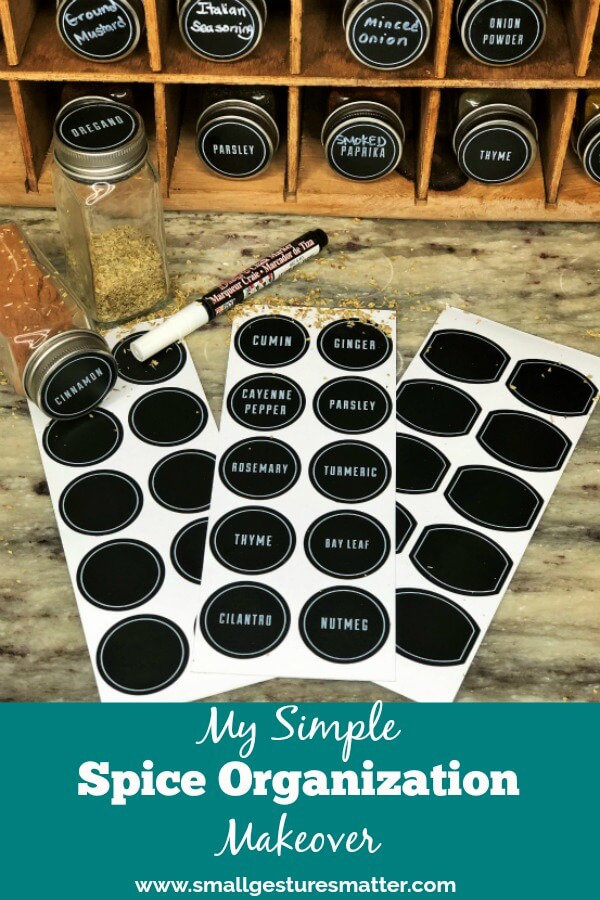 In the 18 years that we have lived in the house, I have organized and reorganized our spices countless times. At one point, I used a label maker and labeled the tops of each spice and placed them in alphabetical order in one of our kitchen drawers. Nothing stayed in alphabetical order, and when we replaced the spice, it never got labeled again. This meant we had to lift every spice out of the drawer to see what it was. That system never worked, yet we kept it forever!

In recent years, In addition to the crazy drawer of spices, I placed a basket on the counter close to the stove for our frequently used spices. Since we started clean eating, we cook from scratch and experiment with different flavors so much more than we did before. That calls for a large variety of spices, which resulted in an overflowing basket, and another unorganized mess.

This pic is after an attempt to get it somewhat under control.  As you can see, this was a beautiful addition to our kitchen decor and a very effective system! LOL! I am not kidding when I say we have been using this for years! 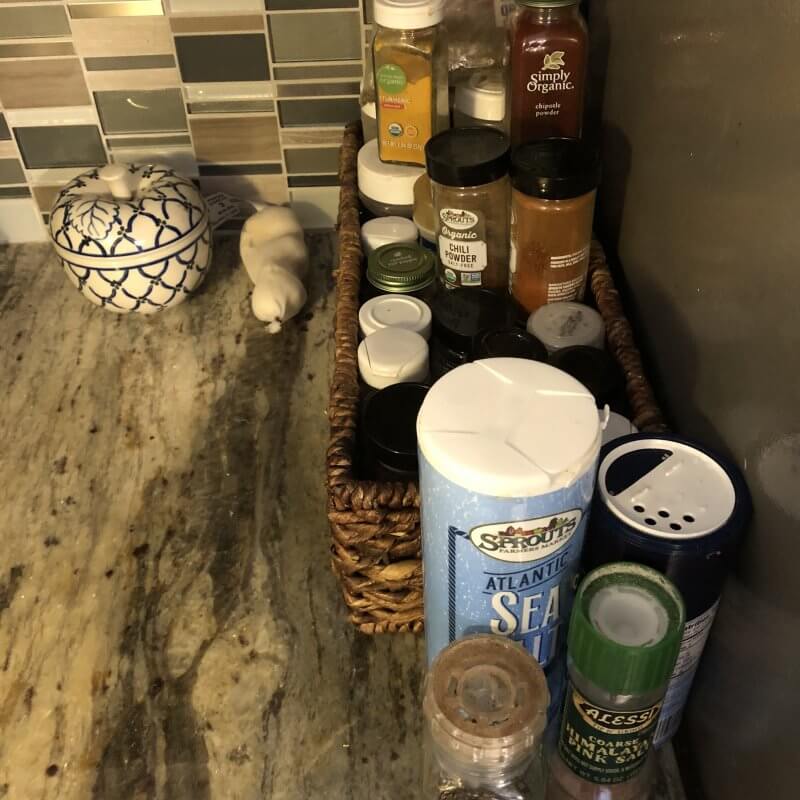 A few months ago, I could not stand it any longer and finally decided to come up with a solution for our horrific spice organization situation! Here are the steps I took to create an amazing spice organization system that works for all of the cooking that goes on here in the SGM kitchen.

Clean Out and Organize

First, I took all of the spices that I had in the kitchen and sorted them. I pitched all of the ones that were expired and combined the duplicates. Can’t imagine why would have duplicates. 🙂 Then, I put all of the occasional spices back in the drawer from HELL for another day. 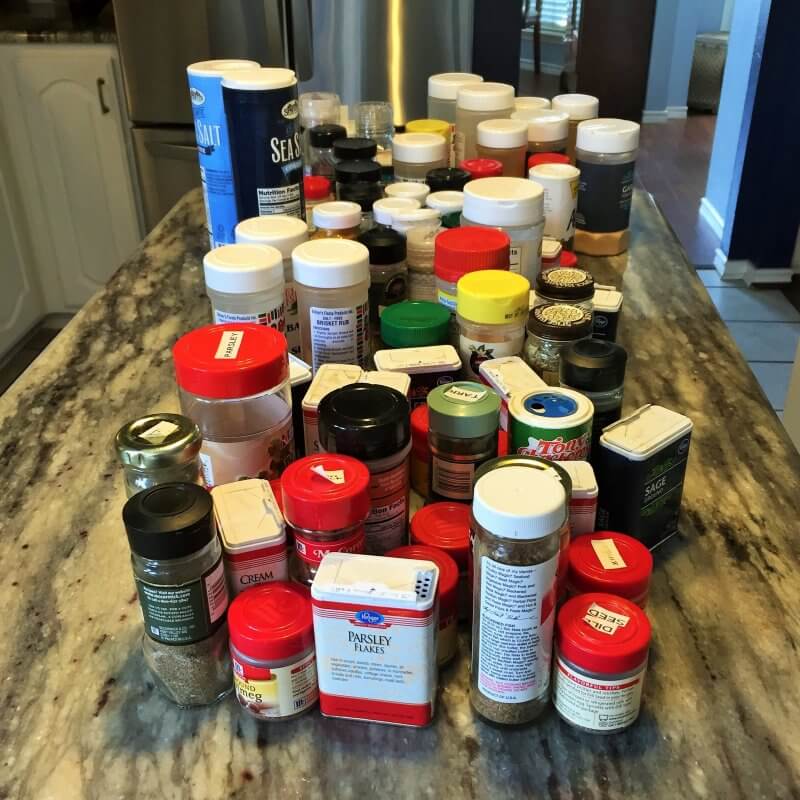 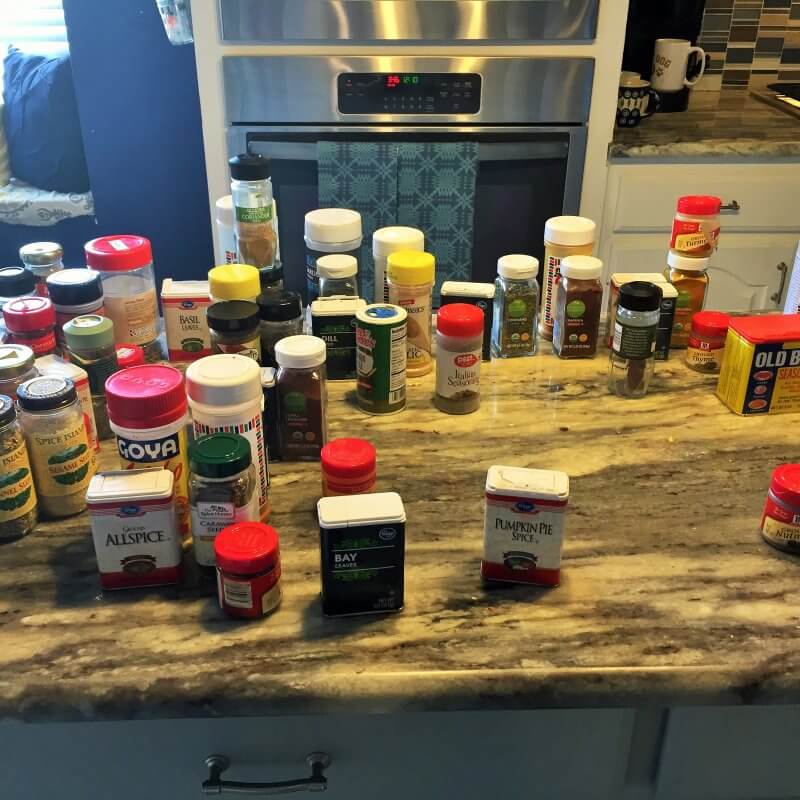 After that, it was time to find an organizer. I knew I wanted something for the counter that would hold a good amount of spices. I took to the internet but did not find anything I was crazy about. Pinterest had a lot of spice storage ideas using vintage soda crates. So cute! But, too large for the counter space I wanted to use.

Both my 18-year-old son and 25-year-old son happened to be around when I decided to see what I could find at a local antique store. They came with me to help me in my search for an awesome organizer.

So glad they joined me because my younger son, Max, found the PERFECT vintage crate. I overlooked it, because it had a bunch of junk in it, and I thought it was for display purposes. He assured me they would sell it. When I asked if it was for sale, they were happy to clean it out and sell it to me for $30! SCORE!

Next up was finding spice jars and labels. The crate had room for 30 spice jars. That seems like a lot, but I live with Tom Small, the spice hoarder. Thirty does not put a dent in the number of spices we have, but it does provide a solution for the spices we use most often, which was the goal for this project.

After looking at ALL of the possibilities, I chose these spice jars and labels from Amazon for the win. I bought 2 sets of jars that included both top and side labels. Each set came with 14 jars and 60 chalkboard labels. There were 20 preprinted labels and the rest were blank. And thanks to Amazon Prime I received them the next day! 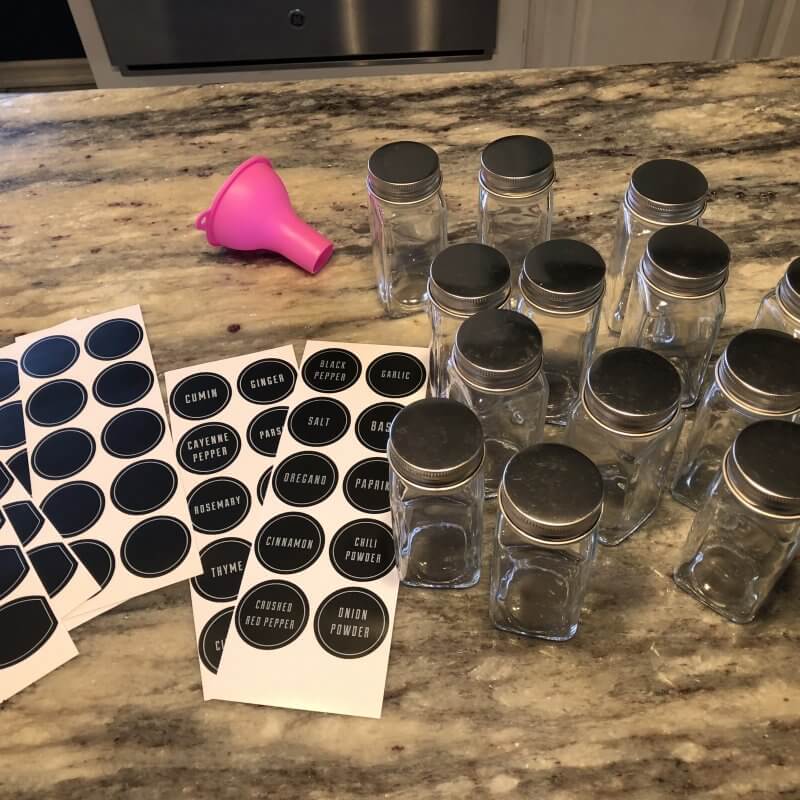 I did not fill all 28 jars right away, because I wanted to wait and see which spices from the crazy drawer got utilized the most. I also wanted to see how this whole system was going to work for us. 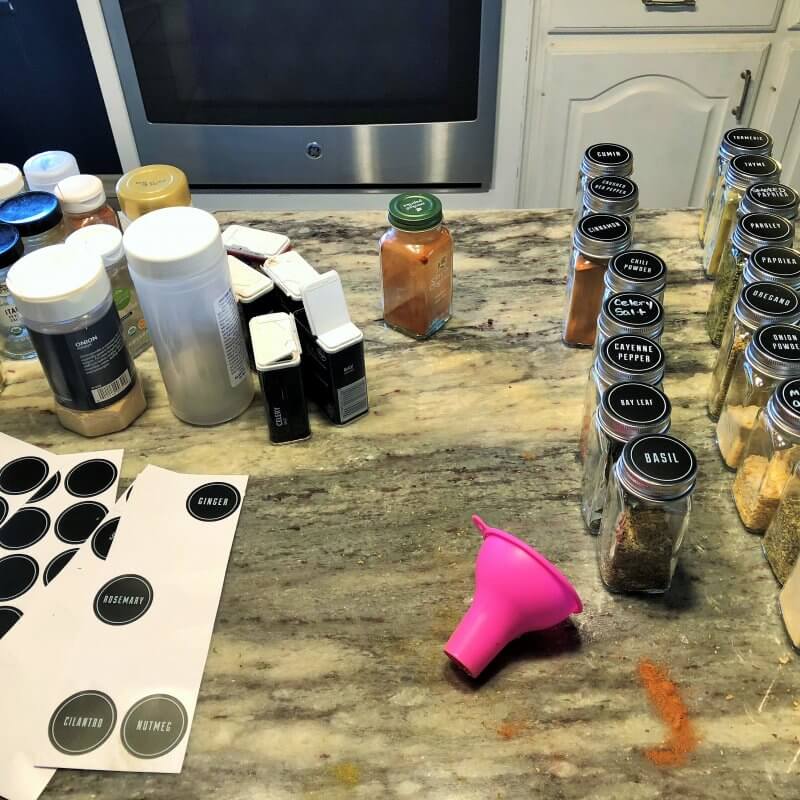 After several months of living with the new system, I am happy to report that we absolutely LOVE it! I filled every single space and it is amazing!

No more pulling out every spice jar to see its contents! No more buying duplicates because we think we are out! And no more eyesore on my kitchen counter.

I have no idea what it was once used for, but it looks like it was custom made for this spot next to my stove. The teacher in me has the spices arranged alphabetically. Isn’t it beautiful? We finally have a system that works! 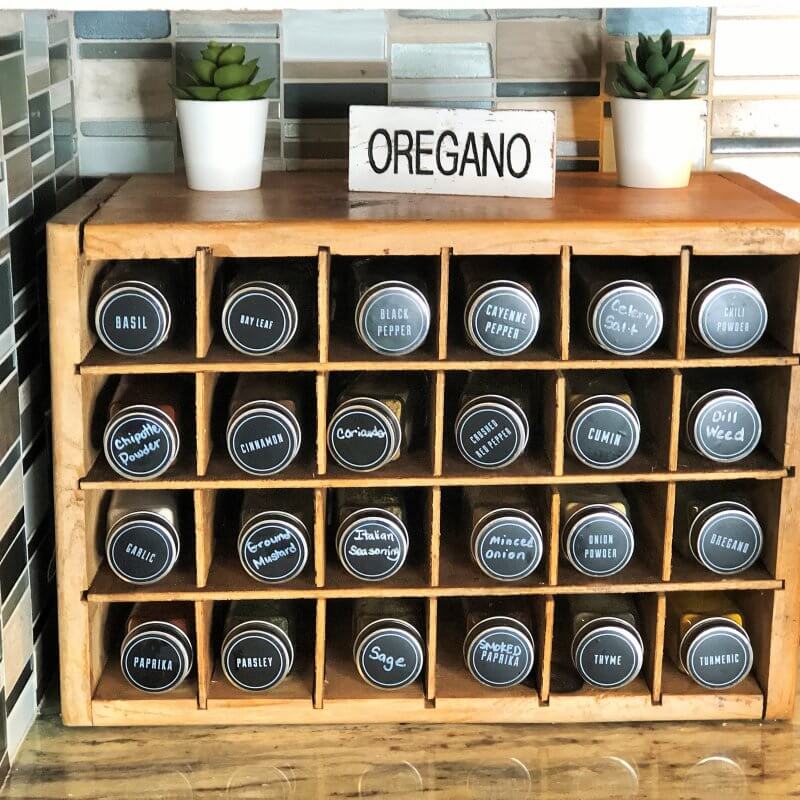 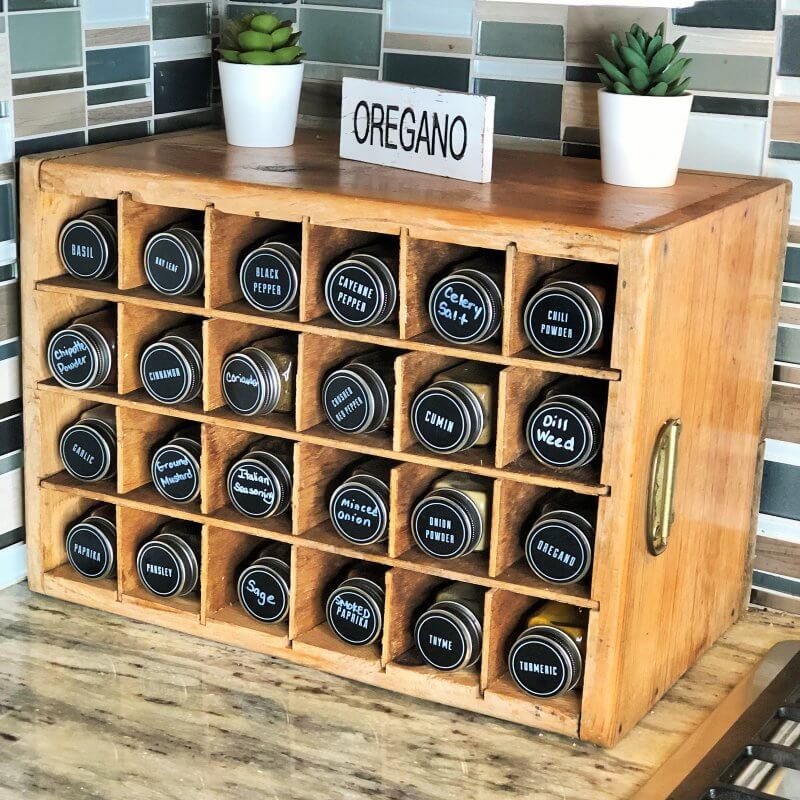 Here are just a few things I’ve figured out just in case you decide to do something similar.

I forgot to measure my counter before we left for the antique store. We totally lucked out. I highly recommend measuring your space before hunting for your perfect organizer.

I only used the top labels for the spice jars because we don’t see the side labels when the spices are stored. This caused a problem one time when I was making my slow cooker chili. I took out multiple spices that have the same color. I opened them all and put them in the chili and then had to smell each one to figure out which top belonged where. Lesson learned!

Some of the jars of the spices I already had from the grocery store were the same size and shape as the new empty jars that I bought. I figured this out after I poured them all into the new jars. All I had to do was switch the lids. DUH! Since there were 30 spaces and I only purchased 28 jars, I was able to use 2 of the jars we had.

The little cubbies on the crate are pretty deep and have plenty of space. I can actually fit 2 jars in each space. At first, when we were running low on a spice we would purchase a new one, and just put it behind the almost empty one until it needed to be filled. Now, we don’t even purchase the jars anymore. We buy all of our spices in bulk from Sprouts or Whole Foods. Good for the environment and for our wallets!

How do you organize your spices? Do you have a system that works well? Please let me know in the comments below. I still have to tackle the drawer from HELL! LOL! 😉

This site uses Akismet to reduce spam. Learn how your comment data is processed. 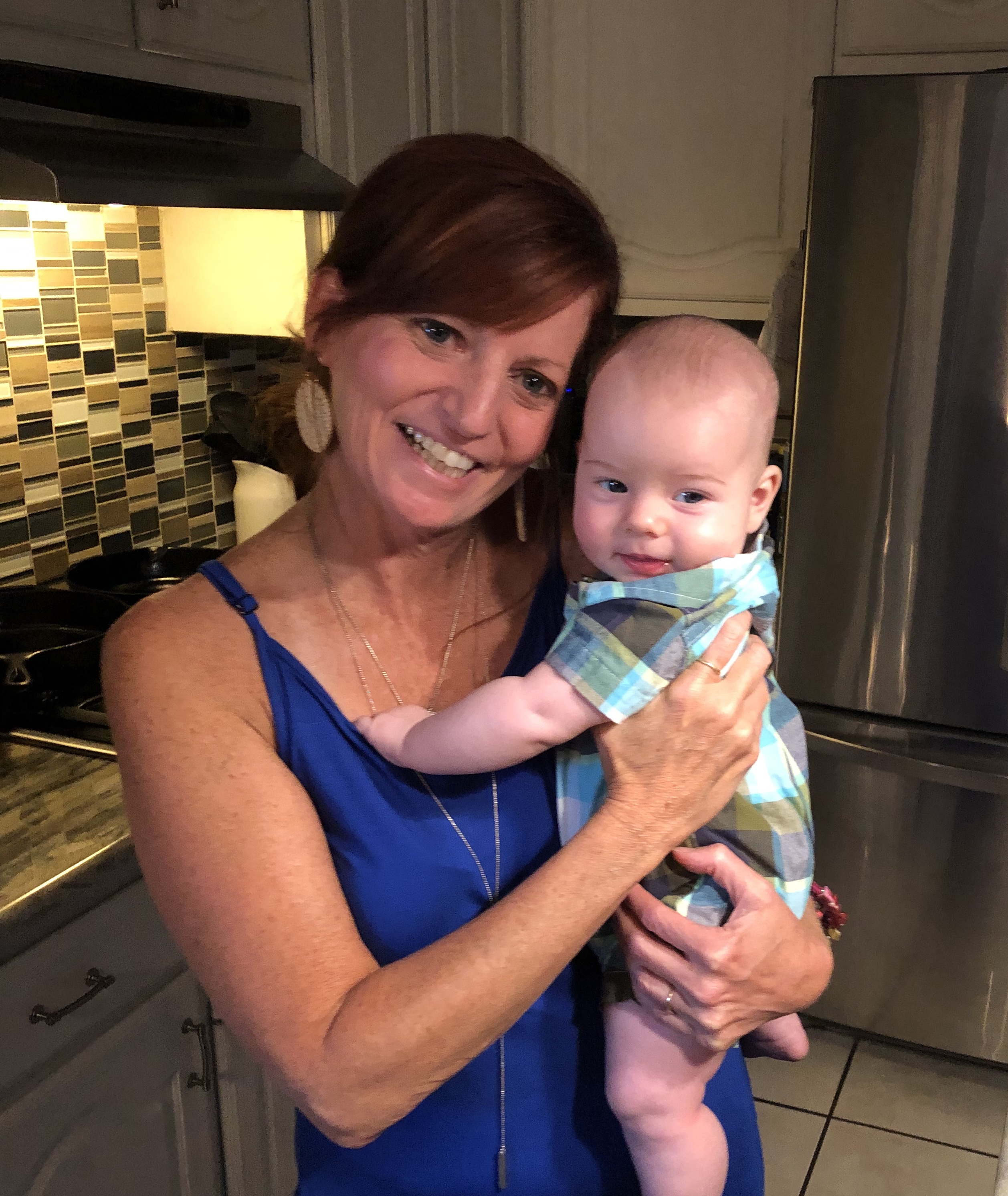 My name is Tammy Small. I'm a mom of three, educator, and entrepreneur. I love bringing people together by creating a warm and welcoming atmosphere with an inviting home, a beautiful presentation, and of course, delicious healthy food! More about Tammy and SGM here. 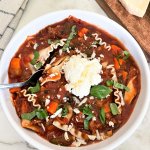